There is a story behind this Kale Salad...

I was raised as a Vegetarian from birth by my parents (who actually started the first health food store in Des Moines, Iowa, back in the early 1970's - but that is another story).  Through my 39 years of being a Vegetarian, I have encountered a lot of challenges living in the Midwest, but I am fortunate to live in a tiny town  of 9,000 people, that actually has more restaurants per capita than San Fransciso. (So in my town there is no shortage of good vegetarian and vegan food.)   But traveling in a three state vicinity is tricky.

My entire family is also from the Midwest.  Let's just sum it up by saying that means everyone is super nice and it also means that the traditional Midwestern food options at all family events are not congruent with a Vegetarian lifestyle- in fact, the idea of a vegetarian diet was confusing. I remember being asked repeatedly, "Do you eat peanut butter?" by several relatives.

On one such event, I traveled with my mom, my four children, and my sister and her son to a family reunion and we mostly subsisted on Subway sandwiches (NOT fresh, I don't care what they say...) and Taco Johns burritos.  By the time of the actual event we were craving real, fresh food so badly. And there were at least fruit plates...  Afterwards, we headed back to our relatives house, and somehow stumbled upon a giant bowl of something dark green. It had been left abandoned in the extra fridge in the garage (along with random bottles of beer and bottled water).  We peered closer at it, and were THRILLED to find that it was KALE!*   We stared at it for a millisecond and started devouring it. We ate almost an entire 16"  bowl of it in one sitting.  It was so unexpectedly delicious with walnuts and raisins in it!  The next morning, we had to come clean about the fact that whomever had prepared that salad had better not be expecting it to still be in the fridge. We said we ate it like fugitives. Fortunately they didn't mind. We did find out which relative made it but never figured out why it wasn't at the family meal table... except that most people did not know what it was. Anyway, there was a normal size portion left over and we took it on the road trip the next day... and it saved us from another day of fast food!  (Which was great because it just so happened that was the day I was taking my oldest daughter to a Justin Bieber concert and I needed the energy to go through with that...) 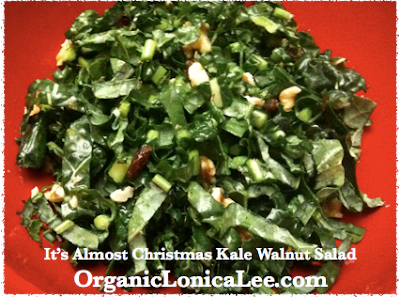 Recipe:
Thinly chop at least one bunch of Organic Kale
Add a handful of  Organic Walnuts,
A handful of Organic Raisins,
The juice of one small Organic Lemon,
And then Sprinkle with Salt.

This salad gets BETTER if you let it sit in the fridge for a while.... trust me.


* Disclaimer:  Kale is sort of like coffee. It is an acquired taste. The difference is that eating kale can probably prolong your life, and certainly improves your vitality.  Even as a life-long vegetarian, I have only been introduced to it in the past few years. And Kale has definitely grown on me, because of the nutrition and energy it gives- I literally feel healthier after eating it.  I am finding many ways to use it, like adding it to my favorite morning juice... and ways to get my kids to eat it for the fantastic vitamins and minerals... usually easiest in a Blueberry Kale Smoothie / Ice Cream! I use  1/3 of my garden space to grow several varieties of Organic Kale!  I am happy to announce that I make this salad when I serve pizza and the kids willingly eat it, and enjoy it! (Tonight was Pizza night - so I had to post this!)