Cheesecakes and Cupcakes and Pancakes, oh my!

I spent a couple of months perfecting cheesecake in winter of 2007. I must have made 30 different flavors, all eggless. Just ask my friend who was pregnant at the time- I constantly had her coming over to test them all. I tried so many varieties that my children actually started saying "Not cheesecake again! Do we have to have cheesecake for breakfast?" (Yet somehow miraculously I didn't gain weight.) Last summer while I was still pregnant I made mini cheesecakes that were bite size, and they were a lot of work, but fantastic!

This is one I made recently
Chocolate Marble Cheesecake.
Eggless & Delicious! 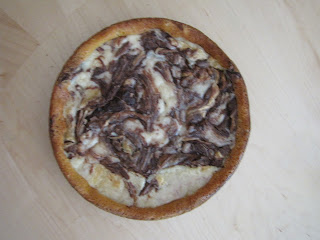 These days I make so much food that I go for quality and quantity ( I have 4 kids! ), and I focus on making sure I include as many nutrients as I can even in desserts. I have tons of cookbooks, but two of them (one is by Jessica Seinfeld - wife of Jerry Seinfeld) focus on the concept of using a small amount of vegetable purees in recipes. So I decided to start with some of the desserts, of course...

Blueberry Lemon Muffins (with a tiny bit of yellow squash puree "hidden" in the batter.
Everything goes fast in a house with 4 children... All of the muffins were gone by evening. 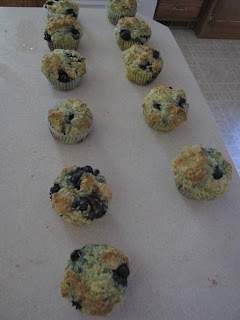 Chocolate Chip Muffins - with a tiny bit of pumpkin puree and yellow squash puree hidden inside... these did not last long... 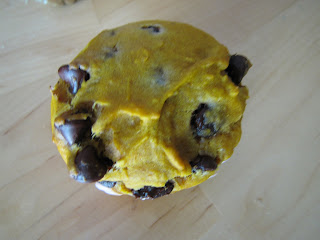 There was one failure though, the Blueberry Cheesecake Cupcakes which no one liked (we kept wondering why the cookbook had no picture, and soon found out why- they were the odd deep purple color and not appetizing to look at.) Another sad recipe was the Angel Food Cupcakes - definitely no picture of those. They didn't rise and only Lily liked them, but that is because she is a sugar addict*.
(*Which we can augment by giving her a colostrum supplement, that works so well!)

My children and husband have now grown accustomed to asking, "so WHAT EXACTLY did you put in this?" with suspicion, so I am taking a short break of unspecified length from the hidden veggies recipes.

Banana Cupcakes with Vanilla Icing and Chocolate Shavings - one of my favorites! 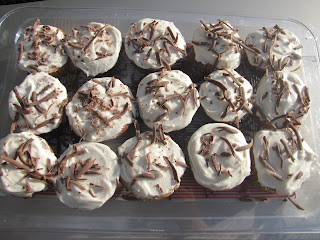 AND FINALLY...
Blueberry Oatmeal Pancakes. Nothing hidden here (unless you count oatmeal?), but I LOVE the texture! 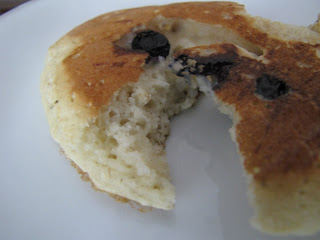 I think I may just have to start a food section on my website...
Posted by Lonica at 10:51 PM