Getting Real About the High Price for Cheap Food 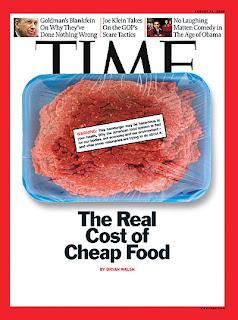 WELL, you may know that I have spent pretty much my entire life in IOWA. This is a current article from TIME magazine which I have excerpted here.

Getting Real About the High Price of Cheap Food

Somewhere in Iowa, a pig is being raised in a confined pen, packed in so tightly with other swine that their curly tails have been chopped off so they won't bite one another. To prevent him from getting sick in such close quarters, he is dosed with antibiotics. The waste produced by the pig and his thousands of pen mates on the factory farm where they live goes into manure lagoons that blanket neighboring communities with air pollution and a stomach-churning stench. He's fed on American corn that was grown with the help of government subsidies and millions of tons of chemical fertilizer. When the pig is slaughtered, at about 5 months of age, he'll become sausage or bacon that will sell cheap, feeding an American addiction to meat that has contributed to an obesity epidemic currently afflicting more than two-thirds of the population. And when the rains come, the excess fertilizer that coaxed so much corn from the ground will be washed into the Mississippi River and down into the Gulf of Mexico, where it will help kill fish for miles and miles around. That's the state of your bacon — circa 2009.

The U.S. agricultural industry can now produce unlimited quantities of meat and grains at remarkably cheap prices. But it does so at a high cost to the environment, animals and humans. Those hidden prices are the creeping erosion of our fertile farmland, cages for egg-laying chickens so packed that the birds can't even raise their wings and the scary rise of antibiotic-resistant bacteria among farm animals. Add to the price tag the acceleration of global warming — our energy-intensive food system uses 19% of U.S. fossil fuels, more than any other sector of the economy.

And perhaps worst of all, our food is increasingly bad for us, even dangerous. A series of recalls involving contaminated foods this year — including an outbreak of salmonella from tainted peanuts that killed at least eight people and sickened 600 — has consumers rightly worried about the safety of their meals. A food system — from seed to 7 Eleven — that generates cheap, filling food at the literal expense of healthier produce is also a principal cause of America's obesity epidemic. At a time when the nation is close to a civil war over health-care reform, obesity adds $147 billion a year to our doctor bills. "The way we farm now is destructive of the soil, the environment and us," says Doug Gurian-Sherman, a senior scientist with the food and environment program at the Union of Concerned Scientists (UCS).

But we don't have the luxury of philosophizing about food. With the exhaustion of the soil, the impact of global warming and the inevitably rising price of oil — which will affect everything from fertilizer to supermarket electricity bills — our industrial style of food production will end sooner or later. As the developing world grows richer, hundreds of millions of people will want to shift to the same calorie-heavy, protein-rich diet that has made Americans so unhealthy — demand for meat and poultry worldwide is set to rise 25% by 2015 — but the earth can no longer deliver. Unless Americans radically rethink the way they grow and consume food, they face a future of eroded farmland, hollowed-out countryside, scarier germs, higher health costs — and bland taste. Sustainable food has an élitist reputation, but each of us depends on the soil, animals and plants — and as every farmer knows, if you don't take care of your land, it can't take care of you.

The Downside of Cheap

But cheap food is not free food, and corn comes with hidden costs. The crop is heavily fertilized — both with chemicals like nitrogen and with subsidies from Washington. Over the past decade, the Federal Government has poured more than $50 billion into the corn industry, keeping prices for the crop — at least until corn ethanol skewed the market — artificially low. That's why McDonald's can sell you a Big Mac, fries and a Coke for around $5 — a bargain, given that the meal contains nearly 1,200 calories, more than half the daily recommended requirement for adults. "Taxpayer subsidies basically underwrite cheap grain, and that's what the factory-farming system for meat is entirely dependent on," says Gurian-Sherman.

So what's wrong with cheap food and cheap meat — especially in a world in which more than 1 billion people go hungry? A lot. For one thing, not all food is equally inexpensive; fruits and vegetables don't receive the same price supports as grains. A study in the American Journal of Clinical Nutrition found that a dollar could buy 1,200 calories of potato chips or 875 calories of soda but just 250 calories of vegetables or 170 calories of fresh fruit. With the backing of the government, farmers are producing more calories — some 500 more per person per day since the 1970s — but too many are unhealthy calories. Given that, it's no surprise we're so fat; it simply costs too much to be thin.

But the quantity of that fertilizer is flat-out scary: more than 10 million tons for corn alone — and nearly 23 million for all crops. When runoff from the fields of the Midwest reaches the Gulf of Mexico, it contributes to what's known as a dead zone, a seasonal, approximately 6,000-sq.-mi. area that has almost no oxygen and therefore almost no sea life. Because of the dead zone, the $2.8 billion Gulf of Mexico fishing industry loses 212,000 metric tons of seafood a year, and around the world, there are nearly 400 similar dead zones. Even as we produce more high-fat, high-calorie foods, we destroy one of our leanest and healthiest sources of protein.

Concentrated-animal feeding operations (CAFOs), are every bit as industrial as they sound. In CAFOs, large numbers of animals — 1,000 or more in the case of cattle and tens of thousands for chicken and pigs — are kept in close, concentrated conditions.

To stay alive and grow in such conditions, farm animals need pharmaceutical help, which can have further damaging consequences for humans. Overuse of antibiotics on farm animals leads, inevitably, to antibiotic-resistant bacteria, and the same bugs that infect animals can infect us too. The UCS estimates that about 70% of antimicrobial drugs used in America are given not to people but to animals, which means we're breeding more of those deadly organisms every day. The Institute of Medicine estimated in 1998 that antibiotic resistance cost the public-health system $4 billion to $5 billion a year — a figure that's almost certainly higher now.

But with wonder drugs losing their effectiveness, it makes sense to preserve them for as long as we can, and that means limiting them to human use as much as possible. "These antibiotics are not given to sick animals," says Representative Louise Slaughter, who is sponsoring a bill to limit antibiotic use on farms. "It's a preventive measure because they are kept in pretty unspeakable conditions."

This November, California voters approved a ballot proposition that guarantees farm animals enough space to lie down, stand up and turn around.

Work in a CAFO is monotonous and soul-killing, while too many ordinary farmers struggle to make ends meet even as the rest of us pay less for food. Farmers aren't the enemy — and they deserve real help. We've transformed the essential human profession — growing food — into an industry like any other. "We're hurting for job creation, and industrial food has pushed people off the farm," says Hahn Niman. "We need to make farming real employment, because if you do it right, it's enjoyable work."


"Ultimately it's going to be consumer demand that will cause change, not Washington," says Fedele Bauccio, Bon Appétit's co-founder.

How willing are consumers to rethink the way they shop for — and eat — food? For most people, price will remain the biggest obstacle. Organic food continues to cost on average several times more than its conventional counterparts, and no one goes to farmers' markets for bargains. But not all costs can be measured by a price tag. Once you factor in crop subsidies, ecological damage and what we pay in health-care bills after our fatty, sugary diet makes us sick, conventionally produced food looks a lot pricier.

What we really need to do is something Americans have never done well, and that's to quit thinking big. We already eat four times as much meat and dairy as the rest of the world, and there's not a nutritionist on the planet who would argue that 24 oz. steaks and mounds of buttery mashed potatoes are what any person needs to stay alive. "The idea is that healthy and good-tasting food should be available to everyone," says Hahn Niman. "The food system should be geared toward that."

Whether that happens will ultimately come down to all of us, since we have the chance to choose better food three times a day (or more often, if we're particularly hungry). It's true that most of us would prefer not to think too much about where our food comes from or what it's doing to the planet — after all, as Chipotle's Ells points out, eating is not exactly a "heady intellectual event." But if there's one difference between industrial agriculture and the emerging alternative, it's that very thing: consciousness. Niman takes care with each of his cattle, just as an organic farmer takes care of his produce and smart shoppers take care with what they put in their shopping cart and on the family dinner table. The industrial food system fills us up but leaves us empty — it's based on selective forgetting. But what we eat — how it's raised and how it gets to us — has consequences that can't be ignored any longer.