Can Chemical Abortions be Linked to Midwestern Agriculture?

Since I am pregnant with my 4th baby, and have spent my entire life in the midwest, I thought this article was very important to note... 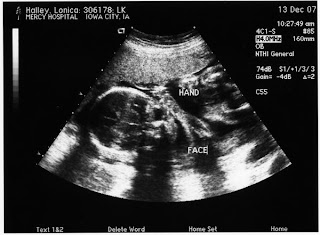 ultrasound from my 3rd baby, Alexis

Can Chemical Abortions be Linked to Midwestern Agriculture?

Driving across a rural Iowa highway, anti-abortion signs are almost as common a sight as farmers spraying crops. Now there is a growing body of evidence linking the substances sprayed on fields to human reproductive health issues, including unintended abortions.

"Abortion means more than just a woman entering a clinic and willfully terminating a pregnancy," said Sandra Steingraber, an ecologist and author invited to speak at the University of Northern Iowa tonight. "It also refers to chemicals we are using in farming. If farming communities - where we know that pro-life sentiments run strong - are contributing to fetal death, then that is a disconnect that we need to examine closely."

Steingraber, an internationally recognized expert on the links between environment and human health, believes society has a moral obligation to move toward chemical-free, organic farming. She plans to outline the reasons for that in detail during her visit at UNI, but agreed to speak with Iowa Independent in advance of her appearance.

"It's definitely the chemicalization of farming," Steingraber said, noting that the topic is somewhat related to flood frequency. "When you have these huge runoffs, you get these big burdens of farm chemicals carried downstream. There is definitely a connection between the farm chemicals used in Iowa and the dead zones in the Gulf of Mexico."

Her book "Living Downstream" was the first text that linked environmental and chemical data to the information available from the U.S. cancer registry. For the first time, and through the telling of her own battle with cancer, Steingraber was able to present cancer as a human rights issue.

"Ecologically, we are linked together," she said. "That's why I called my book 'Living Downstream' - to point to how the things we do in one place affects people in ecological communities and farming downstream."

A study released in 2005 by the Environmental Working Group of the blood taken from 10 umbilical cords revealed an average of 200 industrial chemicals and pollutants in each sample. The umbilical cord blood of the 10 children, collected by the Red Cross after the cord was cut, harbored pesticides, consumer product ingredients and wastes from burning coal, gasoline and garbage. Of the total 287 chemicals identified, 180 are carcinogens and 217 are toxic to the nervous system. In addition, 208 cause birth defects or abnormal development in animal tests.

"There is a growing body of evidence linking exposure to different sources of farm chemicals to problems with reproductive health for both men and women," Steingraber said.

According to Steingraber, the commonly used pesticide methoxyclor has the ability to prevent implantation of an embryo in the uterus.

"When a farm chemical like methoxyclor gets into the body of a woman - and it gets into the body because it is present in the environment in which she lives - then she can abort a pregnancy," she said. "I think there is room in this debate for a big conversation about these chemicals. We need to talk about farm chemicals as chemical abortionists, or chemicals that have the ability to extinguish human pregnancies." Sandra Steingraber, an author and ecologist, will speak at the University of Northern Iowa this afternoon and tonight on how a rural environment can impact human health.

Sandra Steingraber, an author and ecologist, will speak at UNI this afternoon and tonight on how a rural environment can impact human health.

Steingraber said this type of discussion is one that can "bridge the gap of the divide in our culture" for abortion.

"Sometimes you can drive in rural areas and see a big pro-life sign and right behind it will be a farmer spraying chemicals that might very well be linked to reproductive problems," she said.

"Having given many presentations and speeches and having lots of conversations in farm country, I've come to believe that there is just a lot of unknowing. When the evidence is placed before people, they tend to be very moved by it."

In addition to the impact on reproductive health, Steingraber believes food security is another key reason people are now more willing to have a discussion about local and organic agriculture.

"The idea that we are food insecure in the middle of the most fertile soil in the world - that all of our food comes to us floating on barrels of diesel fuel from California and beyond is nuts," she said. "It makes us prone to problems like pathogens in food. MRSA, an antibiotic-resistant staph infection, which is a huge problem in Iowa, may be linked to hog farming operations. But there are a lot of public health problems related to chemical farming. So, rebuilding local and regional food systems and transforming Iowa from a food desert and into a bread basket again is a message that I'll bring."

Health issues that have possible links to farm chemicals include early pubescence in girls, asthma and male genital malformation. And, with at least some of the chemicals, density in the body may only increase from generation to generation. In the EWG study of cord blood samples, for example, researchers found DDT and other pesticides that were banned more than three decades ago.

"Peoples' motivations for seeing these connections and being willing to look at the evidence - because it is all based on evidence, and there is a lot of data under my feet when I talk about these things - people have various reasons for looking at this," Steingraber said. "For my mother, who is quite conservative, it was the idea that the Middle East is, in her words, 'holding us hostage' due to our need for foreign oil. So, that's her entree into thinking about the chemicals being used and their links to human health." 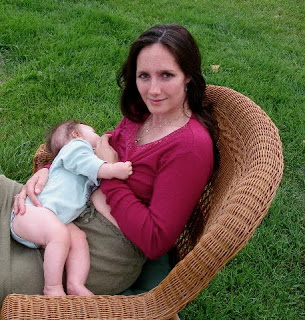 This is me breastfeeding my third baby, Alexis.  You can click the picture to see the chemical free Organic Clothing and Bedding we offer at The Organic Company.
Posted by Lonica at 4:06 AM