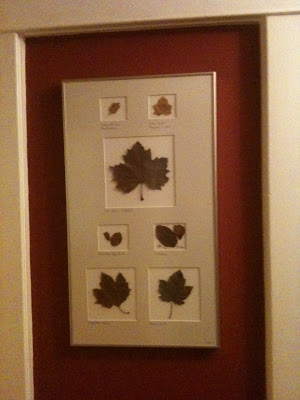 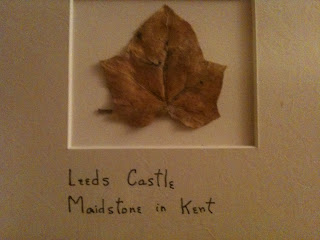 My Grandmother Lois was a unusual woman, with so much to say about her, that I cannot possibly fit in this single post. I remember after she passed away,  how when I was asked to choose something that reminded me of her,  I chose some of her old books, (mostly classics by Thoreau and Whitman and the Bronte sisters) that have a uniquely perfect character and artistry to them, not jsut in their stories, but the florentine style paper and colorplate artwork.

In addition I chose this piece of art she had made from leaves she collected on a trip to England and Scotland. It had always fascinated me, and I asked to have it in my home. Her brother was present, and he also loved it, so since he was my elder, of course I agreed that he should have it.  He asked me to write my name, address, and phone on the back so that some day at the end of his life, it could be passed on to me.

A few months ago I got a phone call that he had passed away, and that apparently in his last few days he remembered his promise to me, and asked his relatives to find me and bring the leaf artwork to me. I had been through a divorce, a name change, and several moves, but they tracked me down (thanks to google I think!)  And recently, this beautiful one-of-a-kind memory was hand-delivered to me!

I like watching as my 9-year old son Skylar notices the intricacies of the leaves, then reads the names of the castles where the leaves were found, and then goes to research the castles on the internet (a hobby of his). It brings him one step closer to his great grandmother he has never met. My 12 year old daughter Lily (who met Lois when she was only a year old) is taking after Lois by beginning to read all of her classic books, and my little 3 Sofia and 4 year old Alexis are collecting local leaves with the idea to make their own artwork.
Lois passed away on Thanksgiving Day of 2001 and she is always missed.
Posted by Lonica at 8:00 AM