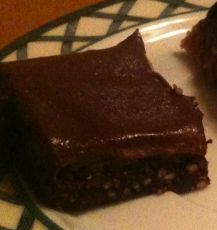 This has become an absolute STAPLE in our house. The kids love them! Rich and decadent, yet healthy and raw!  And actually they only take 10 minutes to make! (But you will want to leave them in the fridge for a couple of hours to get firm, as they slice better!)  I have made this for friends and parties and people always ask for seconds to take home with them! Special thanks to my dear friend Sara Bliss for finding this recipe and showing it to me! It is SUPER important to SOAK the dates that are going to be used in the "Icing". (And don't think of making this without the icing... as it is HALF the dessert, and the most amazing part!) 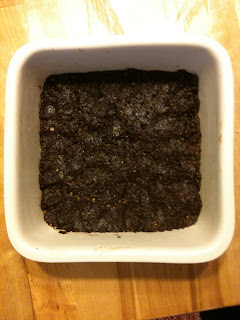 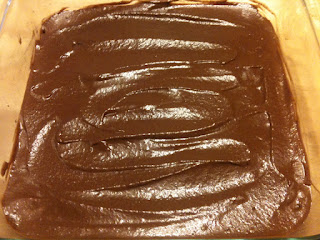 AND TO MAKE THIS COMPLETE - MAKE THIS RAW ICING AND SPREAD ON TOP!

1. Place all ingredients in a high-speed blender. If possible, let them sit in there for a few minutes to soften the dates a little bit.
2. Blend all ingredients in your high-speed blender. The ingredients can be a little finicky to blend, so start at a slow speed and increase speed slowly.
3. Keep blending for a very long time to get a velvety consistency. This is one of those recipes that really makes use of the power of a high-speed blender. If you feel that the blades are just spinning but aren't actually moving all of the icing around, turn the blender off and make an air pocket down the side of the blender with a spatula to expose the blades. Remove the spatula, replace the lid, and start blending slowly again.
4. You'll know it's ready if there are no bits of dates and all you can taste is velvety chocolate goodness.
5. This raw chocolate icing is ready to use as soon as you pour it out of the blender.
It's a great raw vegan icing for cakes, brownies and the like! Iced cakes or brownies should be kept in the refrigerator.

Below is a picture of another version of a RAW BROWNIE  I made, with a layer of Cashew Whipped "Cream" in between! Divine! I will include this recipe in another post! 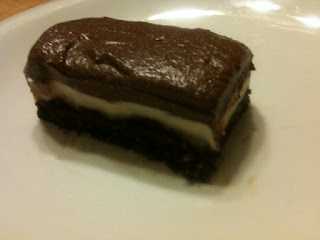