Children Can be Chefs 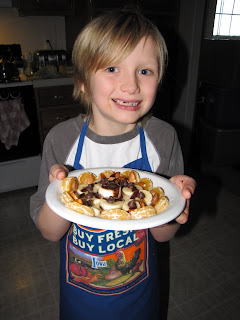 I am an avid cook and baker, and these days I am spending a lot of time in the kitchen, since our family is so big and we have so many different tastes. (I only prepare vegetarian as all of us are ovo-lacto vegetarians, except my husband. And very often for myself, or a few of us, I am making a raw vegan meal.)

My husband and I love watching certain shows on Food Network, especially "Chopped". Our 6 year old son Skylar recently took an interest in in watching some shows with us, and he now cooks with me, though he usually prefers to make his own "recipes" which, as he says, "are first created inside my head." Most of the time this involves a lot of fruit or other ingredients that can be stacked.

Recently he said he was thinking of a recipe in his head that involved eggs, yogurt, and some other things. I patiently explained that in some ways cooking and baking are different. The whole "Cooking is an Art, Baking is a Science" thing. He eventually accepted that raw eggs were not an option, and his recipe (he insisted it was "NOT a pancake!) became something entirely different.

I took Skylar to a high-end kitchen specialty store, and he had so much fun looking around at all the tools and asking what they were for. The staff and owner came up to us and were most impressed by him. In the end that night we left with a kids cookbook:

Although I may have way to many cookbooks to mentions, many of them do not have pictures- which by now I feel is a travesty. And none of them are for kids, not really. One of the cookbooks I personally like is written by Robin Lim, and she published a couple of my recipes. 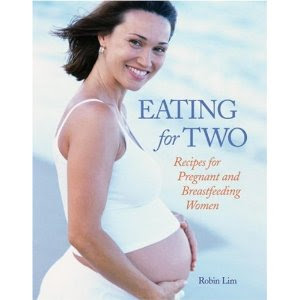