Pesticides - not in my yard! 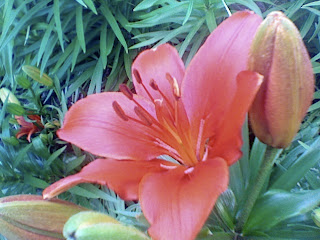 I live about 15 minutes outside of Rapid City, SD. The children and I came home at 8:30 PM tonight and there was a Pest Control truck in the neighbors driveway, which we share with them.

I was told I shouldn't worry because even though it said pest control on his truck the stuff he was spraying was "all natural, non toxic." I saw clouds of white about 3-4 feet over the lawn. So I went inside and googled it. Meanwhile my husband asked them about it and they said they were told "it begins with a P and it is made from a flower."

Well googling stuff is quite simple these days and of course- it is just as bad as everything else... Pyrethroids are carcinogen, toxic to central nervous system, etc, and there was even this official info (from the Pesticide Action Network, which maintains a database of thousands of chemicals normally used) that I copied below.

"Pyrethroids are a widely used class of pesticides applied in agricultural settings, homes, and for the control of some parasites. Pyrethroids work by paralyzing the nervous systems of insects. Predator insects that keep problem pests in check are often more sensitive to these insecticides than the pests themselves. Because pyrethroids are structurally similar to pyrethrins which are extracted from chrysanthemums, manufactures often mislead consumers to believe that pyrethroids are as safe as chrysanthemums. In fact, they are the second most common class of pesticides that result in poisoning, including negative effects on the central nervous system (e.g., loss of consciousness and/or seizures). Pyrethroids are also a skin irritant, and exposure can result in abnormal skin sensations including itching, tingling, stinging, burning and numbness."

I am just glad that I am near the end of the pregnancy where the baby is already formed, pretty much just getting chubbier. I guess the lungs are still forming though. I will hope they are perfect.